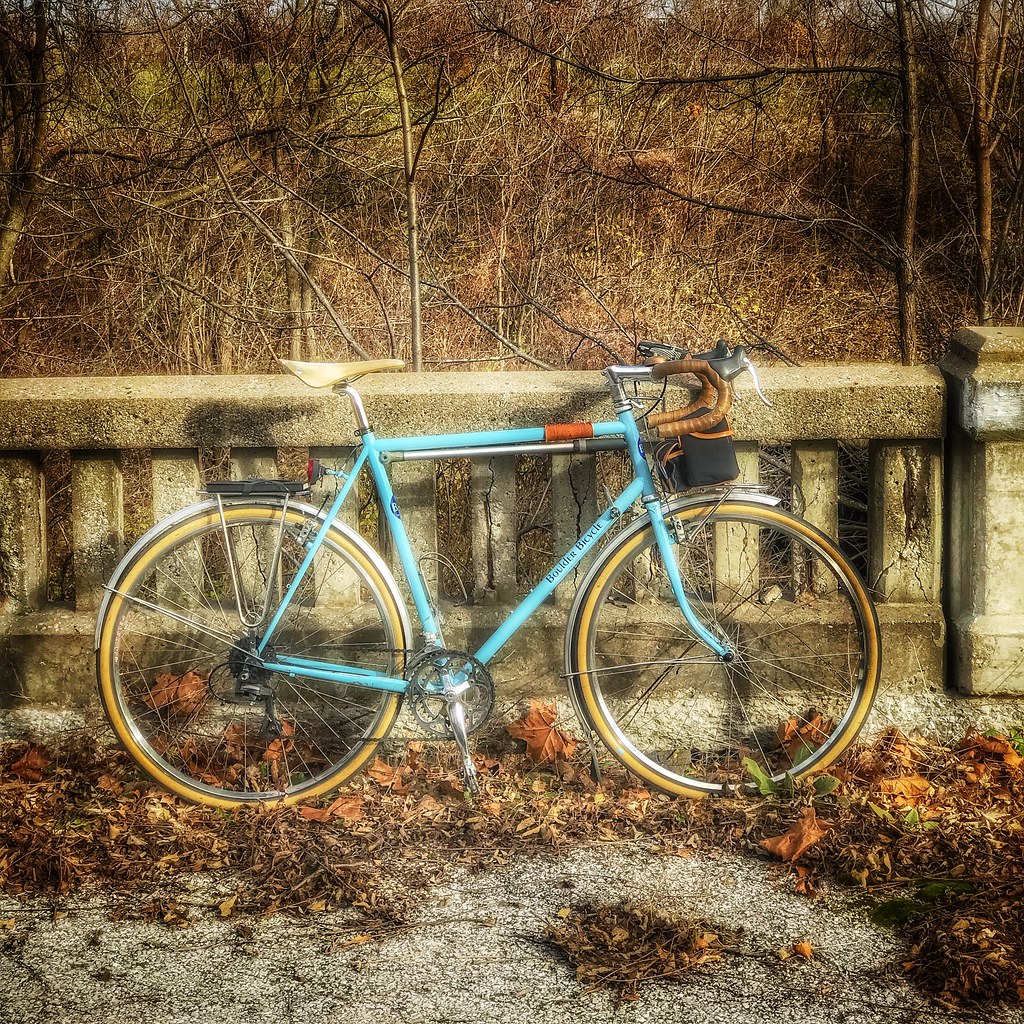 Last weekend was my first ride on my baby since doing an endo a few days earlier. I’d been terrified to get back on my favorite bike because I didn’t want to discover some catastrophic problem. Hell, let’s be honest – I didn’t even want to face up to a scratch. So imagine my relief to get back on the bike and find there are no issues. Even my own bruises have healed up. Life is fine!

(OK, turns out there is a small bite out of my Cambium C-17, and a scratch on my front rim. I’ll ignore the bite, and I’ve polished out the rough spot on the braking surface. It’s all about the patina, right?) 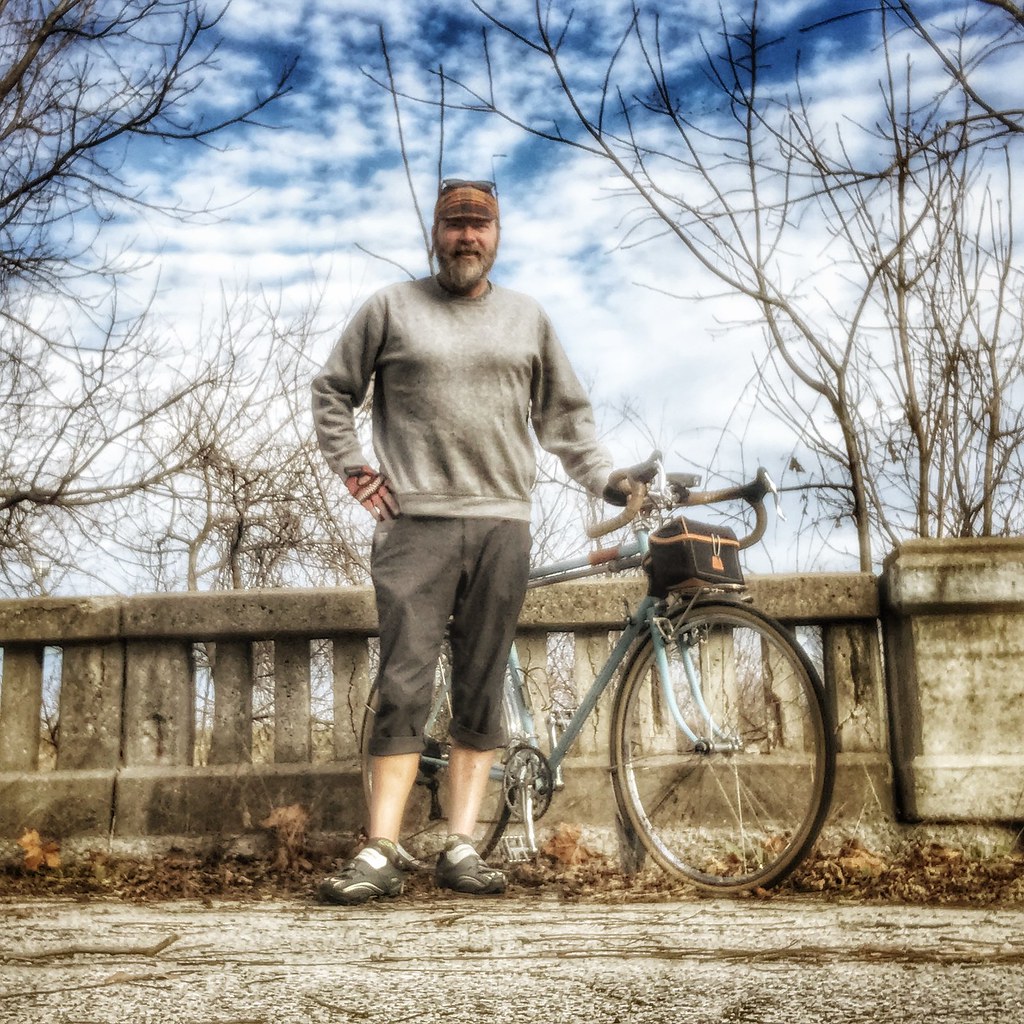 This is a great time of year. I couldn’t care any less about tight jerseys and logo wear. Give me a sweatshirt and a wool cap! 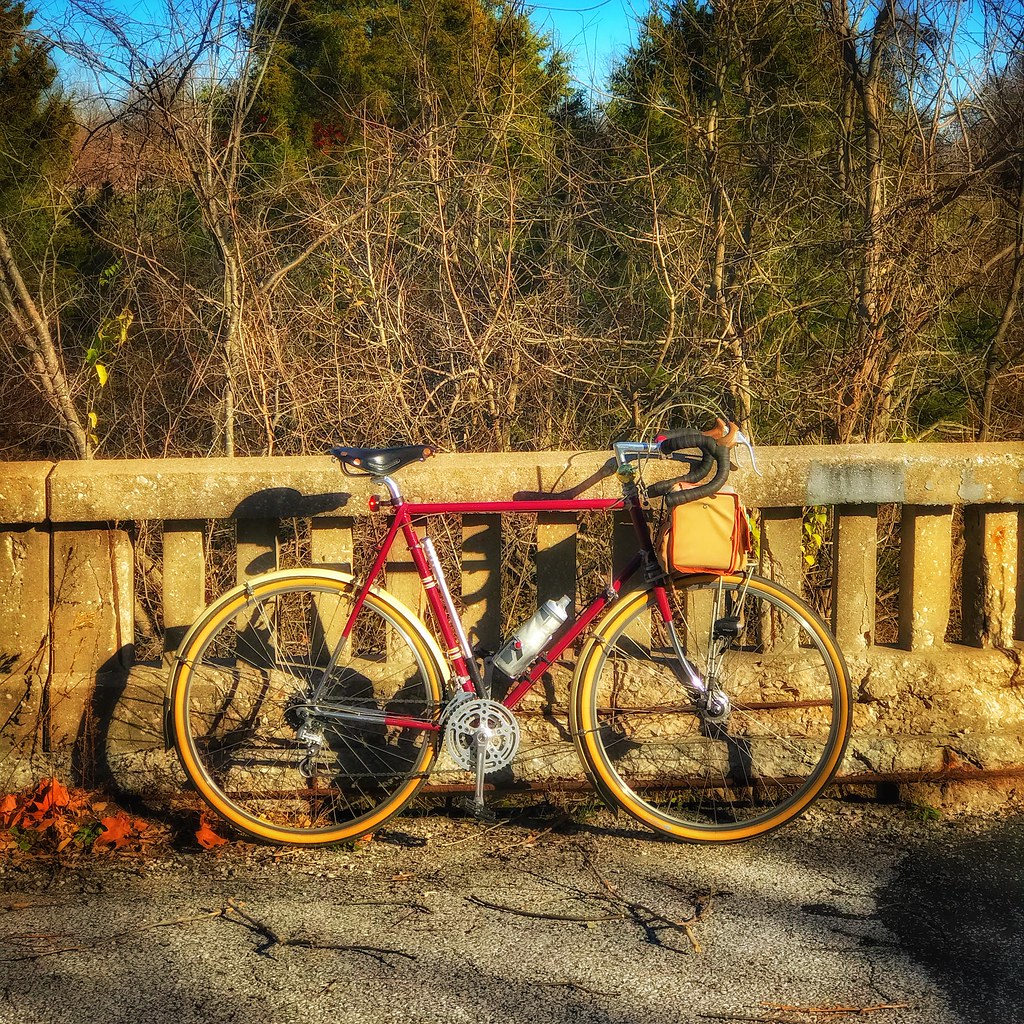 I am sensing a location trend in photo opps this week. My Raleigh International was feeling a little lonely, so I took her out for a spin late one afternoon and found myself stopping for a “water bottle shot” with my iPhone at the exact same spot as I did with the Boulder in the photos above.

I’d been swapping around some components on bikes, so this was an opportunity to dial in the saddle position of the Brooks Pro that was finding its way back onto the Raleigh. I needed the Cambium C17 to better fit the saddle set back on my L’Avecaise, and the Brooks Pro set back is a little closer to my ideal on the Raleigh. Regardless of how precise my measurements are, I still have to finagle the positioning of things so they feel “right” to me on any particular bike. This was no different – I’d ride for a mile, get off and adjust. Repeat. I don’t think I ever even broke a sweat. 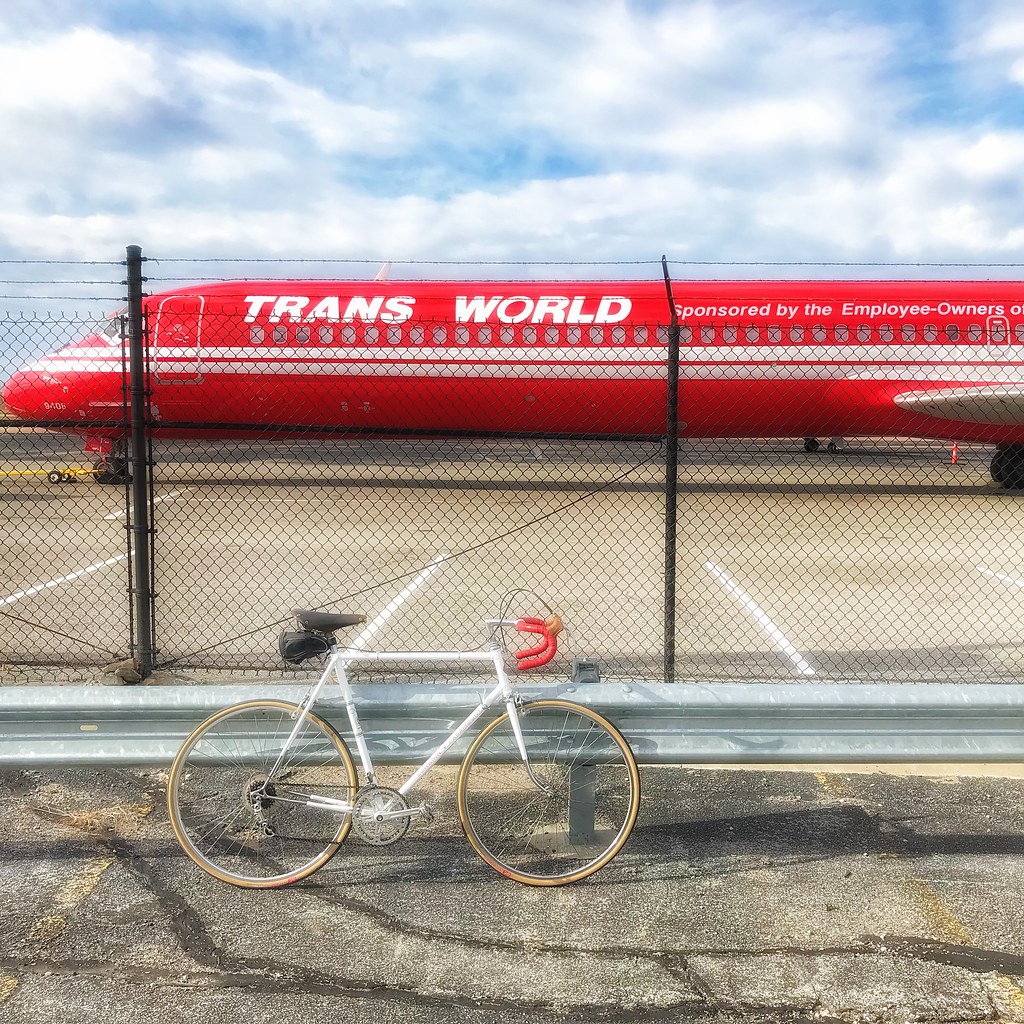 Last Sunday started out cold and windless, but by the time I arrived at the downtown airport with my 1966 Paramount – where there are absolutely no windbreaks, incidentally – there was a cold, stiff wind coming up out of the southwest. The airport loop is almost entirely flat, with only two tiny hills. Flags were furiously flapping from poles, nearly straight out, and as I pedaled in a generally northward direction I was flying. Coming into the two hills that mark a turn to the east, and then to the south, I found myself immediately reminded that my bike is outfitted with a 52/42 crank. (And, by golly, that’s the “old man” set of rings I replaced the original 53/48 rings with!)

The white Paramount is a pretty sharp bike and it rides very nicely. Even though it’s a racing bike, the geometry is much more generous when compared to today’s standards of design. Limping into the parking lot, I encountered this wonderful old TWA jet and set up my white and red-trimmed Paramount for a photograph in front of the red with white-trimmed aircraft. Pretty cool visual, I think. 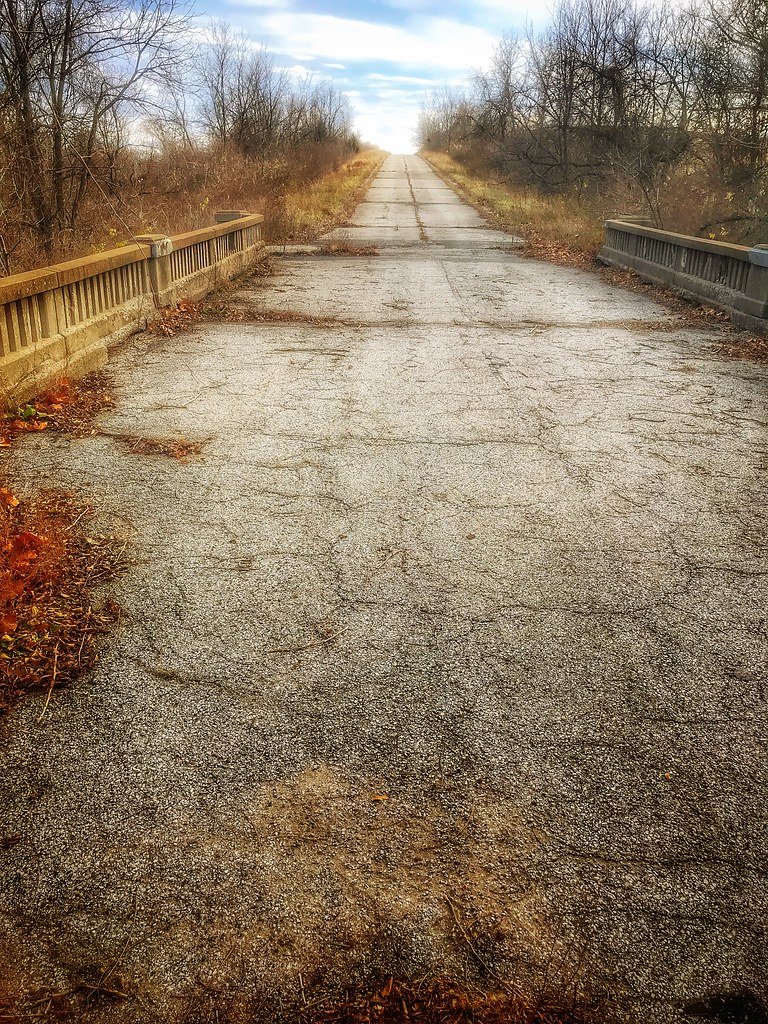 Living near the Missouri River means the geography isn’t especially flat. The roads are replete with undulating hills the closer one gets to the river and the river bluffs. My legs are feeling pretty good as the summer and fall riding draws to a close and riding my fixed gear Hobbs along country roads, particularly on still days, isn’t as challenging as it will be a couple months from now. 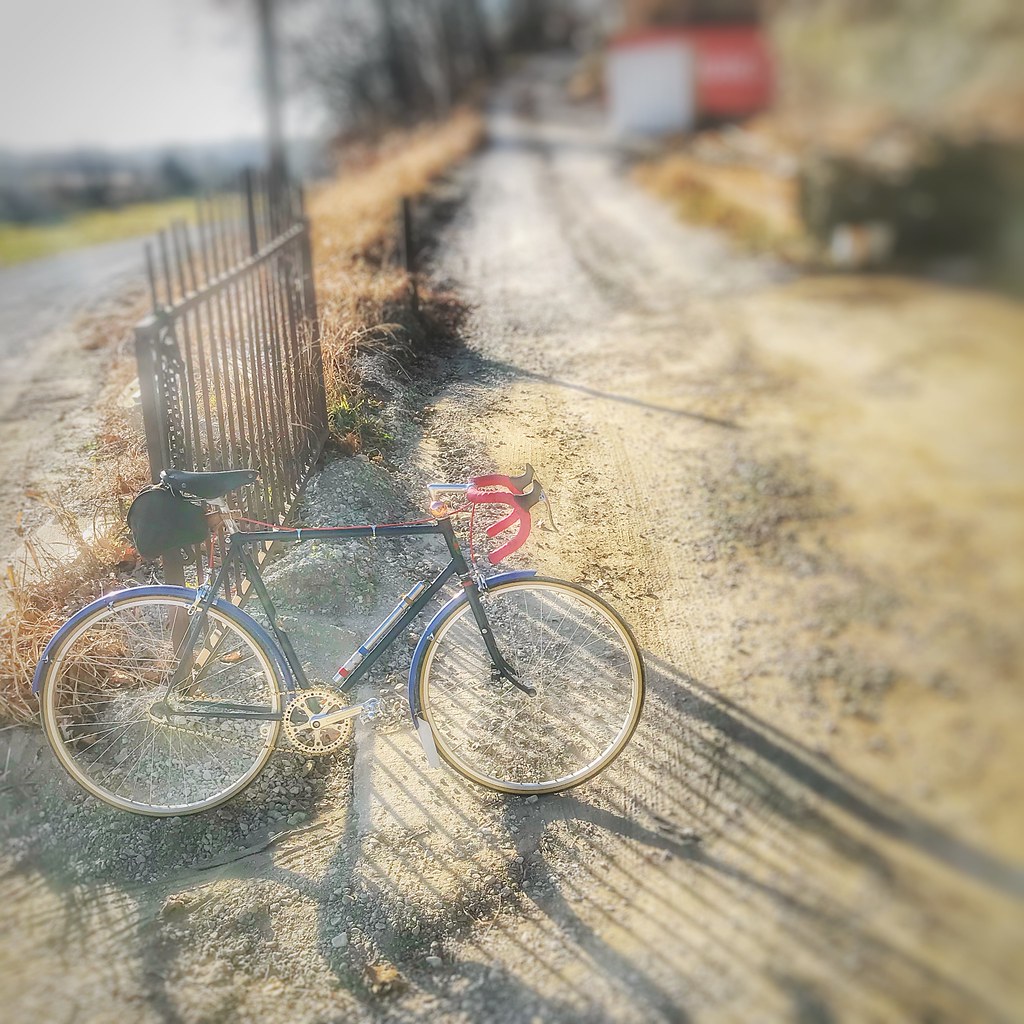 This being the case, I am enjoying these rare, nice December days to ride my 70 year old bike. I discovered that fixed gear actually works pretty well on loose gravel, where a rider will pretty much be pedaling the entire time anyway. I don’t know about anyone else, but I seldom find myself coasting along on the freewheel in such conditions.

3 thoughts on “A Weeklong Cornucopia of Bikes”